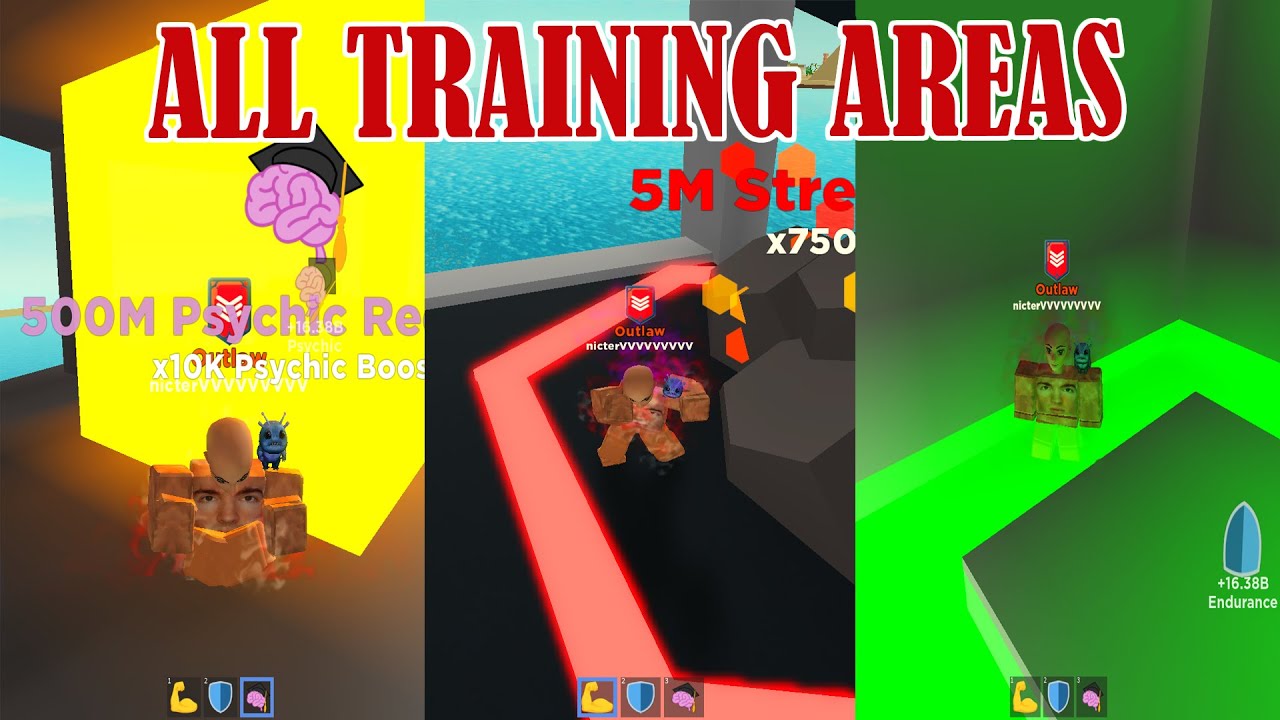 Have you ever wondered what it would be like to fly? In Super Power Training Simulator, you learn how to make it to the top as a villain or a hero. With four levels and tips for each level. This is a really fun Roblox game and I’m going to share my best tips for the different levels you’ll encounter in the game.Here are some Super Power Training Simulator Tips and Tricks.

First, when you start the game (link to the game), you are weak and have no powers. You have five different categories to train: jump force, movement speed, psychic power, body toughness, and fist strength.

The first powers you learn are:

For the fireball you punch the rock right outside of the safe zone to get more fist strength for each punch. To walk on water you have to train your movement speed and psychic. To train movement speed all you have to do is walk around and you will get faster. With psychic you just click 3 and it will look like you are sitting down.

The way you know you are training correctly is if you see +_ psychic power (or what you are training) show up on the screen. When you train fist strength remember not to just punch with c, but to click on 1 to have it on training fist strength and not just punching. You get weights that can help you train movement speed and jump force. If you don’t have enough power to train with that weight you won’t be able to move.

At this level you are mostly trying to find your potential.

Don’t worry about getting to 1 quadrillion fist strength just yet. Focus on body toughness which builds up your defense. You can train two things at once when training body toughness.

You can do push-ups to get a higher body toughness or train psychic while you get body toughness which I recommend the most because when you are invisible only people with lower psychic powers cannot see you. There could be someone there with you and you don’t know because they have a higher psychic.

The best place to train at this level is at the city port which is over the bridge and in the building with a spy face on it. You start out in the ice tub but will soon move to the lava tub. If you stay in there too long early on, you will die so you have to be cautious.

At this level the next two skills you learn are flying, and hiding your aura. To fly, you need to train psychic and jump force. The same is true when you want to be able to fly faster. You train jump force.

When training for hiding your aura you first need to know your aura. Your aura is a red flag for how good your fist strength and psychic power are. You might have noticed a glow starting around you after all of your training for the 10 quests you have finished. Your aura changes along with your fireball, and your body toughness.

After you have 10 million body toughness your aura gets lightning bolts. With this aura comes the curse. You want to be able to pretend you are a noob and get kills (which will be important for your next quest).

If you are weaker than someone else it is also glaringly obvious to others. When you train body toughness, fist strength, and psychic power to 1 million this ability becomes possible. You can go to a floating island above a tornado to train your fist strength even better than with the rock once you can fly there.

When you stay outside of the safe area where you used to spawn when you were a noob you earn 5 tokens per minute as well as alive time. The tokens are used to upgrade your ability power. Each time they double how much power you can train by. If you started by getting 1 psychic per second it would upgrade it to 2 psychic per second. Alive time is important to move up ranks.

You might have noticed on menu you have a class like a c- class or something. When you get to higher ranks you will need to survive for a certain time to move up. If you die you lose your alive time, but it does transfer to the next time you play. So be careful!

You only have two more quests at this level. Killing intent, and soul reap. Killing intent is a very hard quest which you need to kill 1,000 heroes or villains. Innocents do not count for this quest. You also need 100 million psychic power. You should train in the island in the sky.

It is good to hide your aura and make sure they don’t know how good you are. When killing the villains and heroes you should go to the city port and pretend to be a noob. You can change what rank you show by clicking on the one you want to pretend to be. You also should use the walk and run so that you are walking.

If you make people think you are a noob they will try to attack you. They will turn into a lawbreaker and die, or they will be easy to kill yourself. Since this is such a long quest you should work on body toughness and fist strength as well to get better as a player.

For the final quest that the reaper under the bridge gives you, there is a place in the city that you should go to. There is a fence surrounding that building, and inside you can train your body toughness. You need to have at least 1 billion body toughness, though. This quest may take a long time, but you can show off how good you are to the weaker players. That will make up for the long quest.