Daganronpa: Trigger Happy Havoc is a 30 hour game with a large cast of colorful characters for you to learn about. With so many classmates in the game, though, things can get a bit confusing. RELATED: Danganronpa 2: The 10 Best Classmates Ranked. Each character in the game is colorful and has a ton of dialogue that you can uncover through events. Let's Play Danganronpa: Trigger Happy Havoc by FPzero - Part 71: Chapter 3 Deadly Life, Part 4.

Blood
Intense Violence
Strong Language
Suggestive Themes
This is a puzzle-adventure game in which players follow high-school students attempting to escape from a robot-bear captor. As players navigate the school, they sometimes come upon various corpses. Players investigate the various crime scenes, looking for clues and interviewing rival classmates. Finding the killer can trigger “punishment” cutscenes, in which acts of violence are depicted: students killed by a pitching machine, run over by a truck, crushed to death. There are also depictions of characters getting impaled by spikes and knives. Blood is frequently depicted on and around dead bodies. During the course of the game, the dialogue contains suggestive material (e.g., “Like I'd w-want to go anywhere with a dirty slut like you,” “It's not some pervy 'adult' video or anything” and “He...abused me...And he...he took pictures”). The words “f**k,” “sh*t,” and “a*shole” can be heard in the game.

Click here to watch this update's video.
: It's easy just to say, 'Hey, decide who did it!' But there just aren't any more clues, right?
: Very well! Then let's review all the clues we've found up to this point one more time!
: Do we really have time for all that...?
: D-Die... Die!
: If we don't d-do something... we're all g-gonna die!
There's still one clue left, I'm sure of it... Sayaka left it on the wall she was leaning up against.
> Shoot 'just aren't any more clues' with 'Dying Message'
: There still might be one clue left--Sayaka's dying message.
: Dining--wait, what did you say?
: The dying message. She wrote something on the wall behind her, remember? 11037, written in her own blood. There must be a clue about the killer hidden in there.
: Well, before we get too far into that, I need to ask... Can we really be sure that Sayaka is the one who wrote it?
There's no question that Sayaka wrote that message. And I can prove it...
: Her left index finger had blood on it. That could only be because she used that finger to write the message.
: I see... She broke her right wrist during the fight, so she'd have to use her left hand to write...
: Sure, I think we can all agree Sayaka wrote it, but still... What the heck do those numbers? 11037?
: Hey Chihiro, you're a computer nerd or whatever, right? You should know all about numbers and shit!
: N-No, that's not... Yes, I'm a programmer, but I don't see any kind of meaning in these numbers.
: ...Of course. It's because they're not numbers.
: Oh! Yeah, it looks like...
: Huh? What? What!?
: No, it's just...look at the numbers assuming they're *not* numbers. Don't these first two, 11, look less like two numbers and more like one letter?
: Ah, you're right! The connecting line is barely there, so I assumed it was 11, but...
: Looking at it now, you could also read it as an N!
: Whoa! You might've finally just said something worth a shit!
: Bwehehe! Out little grey cells are really getting excited now!
: But even if that really is an N, 'N037' doesn't make any more sense than before...
: ...
Dammit! It's no use! I just don't know...!
: ...
: Rotate the image 180 degrees.
Huh? Rotate it...?
I...I think maybe... Maybe I see something... 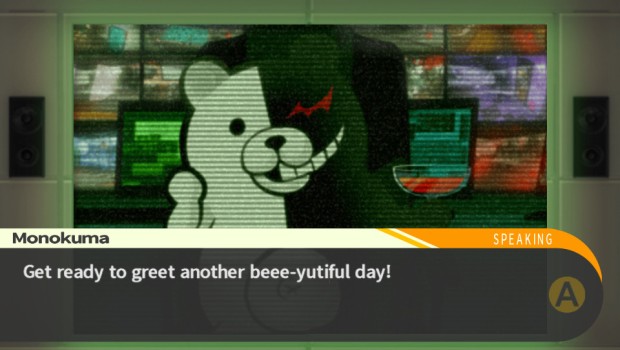 : Wh--!?
: What the hell are you talking about!? I-It's just a coincidence!
: It's just a bunch of random squiggles that happen to look like my name!
: No, it's not random at all.
: She wrote that message on the wall behind her as she was leaning up against it. In that position, she couldn't move to write normally, and had to write upside down, as it were. And as a result... When you look at it standing in front of her, it ends up getting flipped. Try it for yourself, if you want. Write something sitting like her, and the letters will be inverted.
: Th-That sounds like one hell of a stretch to me...!
: I'm the killer!? You can't just go and say shit like that!
: If you're *not* the killer, then why did you try to destroy the evidence?
: ...Huh?
: You know what I'm talking about, right Makoto? The evidence Leon tried to get rid of?
The evidence that Leon tried to get rid of... It's that thing I found on the ground in front of the incinerator, right?
Present 'Burnt Shirt Piece'
: You mean...the burnt shirt piece I found laying on the ground by the incinerator, right?
: As the killer stabbed Sayaka, they must have gotten some of her blood on them. And to dispose of the shirt covered in the victim's blood, they threw it into the incinerator.
: But one piece burned off and got left behind...
: And the killer didn't notice. If they had, they most certainly would have panicked. Isn't that right, Leon?
: Wh-Wh-Wh-Wh--!?
: But is one scrap of fabric enough to conclude that Leon is guilty?
: Yeah... I mean, Leon's not the only one wearing a white button-up...
: Th-That's right! There are plenty of other people here with shirts like mine!

Danganronpa Trigger Happy Havoc Who Was The Killer Instinct

: With just that one little charred piece, there's no way you can say for sure who it belongs to!
: You're right. That alone isn't enough. But there are some other points that may reveal the truth...
: Are you finally starting to understand? The answers to all the riddles are right here.
: Yeah, I think so...
The burnt remains of the button-up shirt, which the killer wasn't able to get rid of... There's something about it we need to pay attention to in order to figure out who's responsible.

> How it was disposed of
: If we look closely at how the shirt was disposed of, we should be able to figure out who the killer is.
: O-Oh, yeah...that's a good point. I think I know what you're gonna say... You can't reach the incinerator without opening the gate in front of the trash room, right? And obviously you wouldn't be able to hit the switch to turn it on, either. You'd need the key to get in. And the one with the key was...the person on cleaning duty!
: So the killer had to be whoever was in charge of taking care of the trash! Right!?
: Hahaha. Interesting...
: ...Gweh!?
No, that's wrong. There was another way to use the incinerator without being the one on cleaning duty. And that's exactly what proves that Leon is the real killer!
: The key to the trash room...
: Whoever was on cleaning duty must've had it, right?
: So the only one wh-who could get to the in-ncinerator was...the p-person in charge of the t-trash?
: And you'd have to get close to the incinerator in order to destroy the evidence.
: Which means the only possible suspect is whoever had the trash room key!
: Okay, so...the person who would have had the trash room key was...
: Huh? Me...?
: NOOOOOOOOOOOOOOOO!!!
There absolutely was a way to use the incinerator without using the trash room key. The killer was able to turn the incinerator on by using something I found on the ground nearby...
: The crystal ball could've been thrown at the button!
> Shoot 'you'd have to get close to the incinerator' with 'Shattered Crystal Ball'
: Hold on! I think I know how someone could dispose of the evidence without using the trash room key!
: But if you can't get past the gate, you couldn't possibly turn on the incinerator, could you?
: Yes, you could. If you used this.
: What is it, some kinda glass ball? It's busted to hell...
: Actually, it was supposed to be a crystal ball. But, uh...
: But...how would you use it?
The killer had to use the glass ball in a certain way. Which was...
> Throw it
: The killer simply took aim at the incinerator switch and threw the ball through a gap in the gate.
: All they had to do was hit that switch, and the incinerator would come to life.
: Someone threw that...through a gap in the gate!?
: Remember what you said before, Hifumi?
: Huh!? Someone turned the incinerator on! Very strange... I'm quite certain it was off last time I was down here.
: Perhaps it was the work of a fairy...
: Hifumi had the key, so the only way the incinerator could have been turned on without his knowledge was because the killer was able to hit the switch *without* opening the gate.
: Once they'd gotten the incinerator going, all they had to do was ball up the shirt and toss it in!
: H-Hey, come on...what the hell is this?
: All you have to do is look at the scene to know that the killer never actually went inside the trash room. The shards of broken glass, the incinerator left running, the piece of shirt that escaped the fire... If the killer had been on cleaning duty, the evidence would have been taken care of much more thoroughly.
: W-Wait, no...just hold on!
: But the distance from the gate to the incinerator has to be at least...thirty feet, right? The pinpoint accuracy you'd need to throw a glass ball that far and hit something that small... Could someone really do that?
: Th-That's right! There's no way! It'd be impossible!
: Difficult, absolutely. Impossible? I don't think so. Because the killer is...
It wouldn't have been much of a challenge at all for the killer. Because...
> Ultimate Baseball Star
: Because the killer is the Ultimate Baseball Star. Isn't that right, Leon!?
: D-Do you have any idea how stupid you sound right now!?
: A target thirty feel away would surely be little challenge for the Ultimate Baseball Star.
: Y-Y-Y-You can't be serious! I...! I...!
: I'm not the killer! These goddamn shit-for-brains have got it all wrong, I'm telling you!
: You still won't admit it? Okay then...
: Makoto, go ahead and review the incident one more time to make his crime perfectly clear. And with that, we can end this...
: Listen to me! What the hell do you mean, end this!?
: Say what you want, Leon. But all the questions have been answered, and the truth has been revealed. Now here's what happened!
Comments are closed.